I’ve had two Princess Mirah batik jelly rolls in her red, white, and black color scheme for a couple of years. I couldn’t decide what to do with them. Next week my Innova longarm is arriving and I have been putting together a bunch of tops in advance because I know I’ll go longarm crazy for a few months. Since I need more tops, these two jelly rolls are going to be used today! I have decided to not follow a pattern and just do whatever comes to mind with these.

I started by separating out the red strips, and cutting about a quarter of them in half lengthwise. Then I sewed together randomly chosen strips of black and white fabric strips and inset red a skinny red strip randomly. I just used one red per four of the black and white strips.

Now I have a slight problem. I only had enough black and white strips to make six of these long units. I want to cut them into squares and I am going to need way more to have enough for a quilt. What to do? I do have a lot of plain black fabric that I was going to use in another quilt back. I think I can use it for smashing on this top. But I need more blacks. So I’ll do,the same thing with the red jelly roll strips and take my last two black and white strips cut on half to do a reverse scheme. That will get me some more coordinating blocks. (I ended up with three units that were mostly red.) 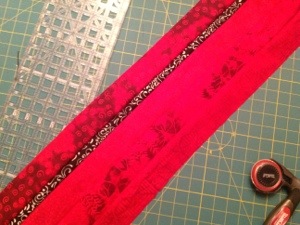 Hmm. I think a bunch of square blocks made up of these units might be boring. So lets chop them up and add a slash of red. I do have all those left over half strips to use up. First I need to figure out what size my blocks need to be. The ends of my striped units are jagged because the lengths of the jelly rolls strips were not the same. The shortest strip was 43.5 inches. 43 minus the selvedges. So I think Imcan get 5 eight and a half inch blocks from each unit. Now I’m gonna be adding some to each block since I want to put random slashes of contrast in them so maybe I can get a little more .nah.. Lets go w five. Off the bat they will be a little taller (9.25) than wide (8.5). But I’ll add more with the slashed and I’ll need to square them up. Let’s see what happens. 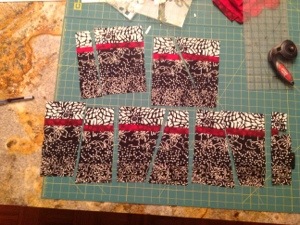 I slashed all the blocks randomly at different angles. See the leftover jagged end I trimmed off? Now to sew in some more of the red half strips and see how it looks.

I think its pretty good. It’ll be very interesting when I turn some blocks sideways later.

South Texas chick who drinks margaritas, makes not boring socks, quilts, leaves her christmas lights up till March (inside the house), and has an opinion on everything. Has a not-so-secret occupation and she also married into one of the coolest ranching families ever. View all posts by FreeFormQuilts